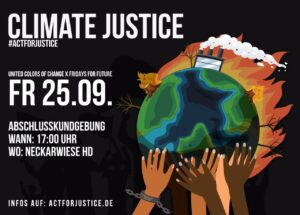 On September 25, 2020, there will be a global demonstrationBei einer Demonstration treffen sich viele Menschen. Sie sagen dort ihre Meinung. Manchmal bringen sie Plakate mit. for climate justice and thus for human rights, democratic co-determination and compliance with the 1.5 degree target. During the corona pandemic, the form of protest is severely restricted in many countries, but the climate crisis and the injustices associated with it will continue to accelerate this and every year in the future if we don’t do anything. Hence, the global protest is necessary.

After worldwide climate protests in 2019 with millions of people and continuing protests against structural racism and racist police violence this year around the world with hundreds of thousands in Germany alone and millions in the U.S., we, Fridays for Future and United Colors of Change (born out of the BlackLivesMatter protests) in Heidelberg, are joining forces to fight for justice and the protection of human rights.

Why are we demonstrating?

“People who contribute the least to the climate crisis suffer the most from its effect. Furthermore their ability to mitigate the consequences of the climate disaster has been restricted through exploitation and exclusion. Structural injustices of a racist system, that allows profit at the expense of humankind, have determined our world order for centuries and continues to do so today.”

Why Fridays For Future and United Colors of Change?

That is why United Colors of Change and Fridays For Future have now joined forces. The climate crisis is racist, it is caused and intensified by neo-colonial structures. This realization is necessary to get to the root of the crisis.

Therefore the fight against racism, which is not only structurally anchored in our climate policy but also in the movement against it, is necessary to achieve real climate justice. To this day, those that are most affected by the climate crisis are not afforded the opportunity to speak at climate conferences and in parliaments. They are not part of the select group of powerful and rich industrial nations who get to decide on protective and preventive measures. Exposing and coming to terms with discriminatory structures in Germany and Heidelberg is therefore a first and necessary step in our fight against the climate crisis.

Fridays for Future also has a racism problem in its internal structures, because Germany has a racism problem. We are growing up in a system that increasingly justifies structural discrimination instead of fighting it. With the claim to be a social movement, if not the biggest social movement of our time, we have to expose injustice and stand up for global (climate) justice! If you want to read more, click here.

It is not without reason that we, the organizers of the BlackLivesMatter protests in Heidelberg, have chosen to be known as “United Colors of Change”. As “United Colors of Change” we connect and empower People of Color on different levels in our community. Through demonstrations, interventions and events, we want to work to clarify the origins of racism and connect them to past and current global injustices. In Heidelberg we are united as a community for a just society that is free of discrimination.

Course of the demonstration

Under strict hygiene regulations, we will start from 15 (?) o’clock at two starting points to avoid large crowds